Thomas whispered in my ear, “Do you think this better if you can understand what he’s saying?” I told him I thought it was probably worse.  We sat atop the stage, in white plastic lawn chairs, beneath dangling multicolored balloons, facing the Engineering Study Program class of 2011, Mae La refugee camp, on the Thai-Burmese border.  Unable to understand the seemingly endless speeches in the Karen language, I nevertheless tried to appear interested.  To my right, a large man in a blazer, made out of hand-woven Karen cloth, dozed peacefully. A younger man next to him surreptitiously talked on his cell phone, his hand over his mouth to muffle the noise. 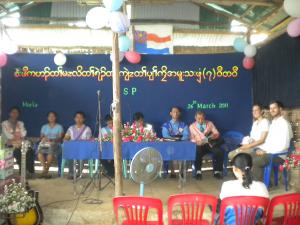 The stage at the graduation ceremony. Thomas and I are sitting on the far right. We were apparently stage-worthy guests (because were are BGET volunteers)

But my mind wandered, as it tends to do.   I started thinking about what I will do after my fellowship ended: “should I become an environmental engineer in San Francisco? Or should I move to Boston to be a public policy research assistant?” My eyes rested on the animated commencement speaker who had been talking for nearly an hour.  Suddenly it dawned on me: what could he possibly be saying? What do you say to graduating students trapped in a refugee camp? Follow your dreams? How can they?

The camp was nothing like what I had expected.  I had spent the previous few months working in schools in Kibera, a large slum in Nairobi, Kenya.  There, the narrow paths were a mix of plastic bags and sewage, the schools over-crowded, the children dirty and dressed in ragged clothes.  As far as the eye could see, there were rusty tin roofs, TV antennas, and dirt.  What I had seen of Mae La camp was rolling hills with lush vegetation, dotted with traditional bamboo houses perched on stilts.  In the early mornings, crisp air was filled chanting school kids.  The post-secondary engineering students I worked with were well dressed, eager to learn, and spoke the best English I had encountered in all of Thailand.

But these students are trapped.  And that is worse. 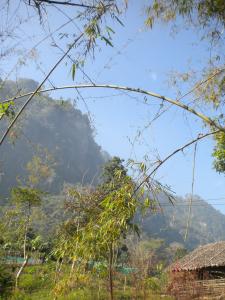 The Burmese people regularly protest their brutal government—most recently in 2003 and 2007.  But the military junta controlling the country is just too powerful for the people to overcome.  Last November, Obama declared it  “unacceptable to steal an election, as the regime in Burma has done again for all the world to see.”  He promised continued monitoring of the situation.  The freeing of Nobel peace prize winner Aung San Suu Kyi on November 12, 2010 was an important step, but the Burmese government continues to massacre its own citizens. Just as it has been for the last 59 years.  Isn’t it time we did something to stop them?

Meanwhile, the bright Engineering Study Program graduates will work to perfect their English and try to find something to do in the camp.  But mostly, they will wait.

Because I was so perplexed about what was said in the graduation speeches, I sent Mular, second in the graduating class and avid facebooker, a facebook message asking. She wrote me:

“He said if we have a high goal we must have persevere…He said the place where we live now is not our place. We don’t know when will we leave. So don’t lazy in learning when we have a time…If u want to know more, u can ask me. 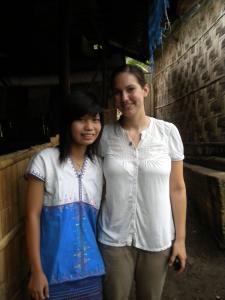